The Early 50s recession, also known as the Recession of 1953, was mainly brought about because of the post Korean War financial bungles that often accompany the end of any war. False highs, this time in the form of a large inflationary period, came crashing down as the war came to a close and more funds were put into national security than were ever before.

Another factor in the Early 50s recession was that in 1952, the Federal Reserve changed its policy. They reformed the monetary policy to be more restrictive, and in doing so, hoped that it would control inflation.

Thus, with further straining of the post-war economic environment, a small collapse was in order. The modern economic cycle will need to relieve pressure once in a while, and the system relieves the pressure with these “recessions” as we call them. They happen every so often, and part of the Fed’s responsibility is to try to make it as smooth as possible. 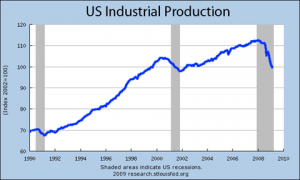 The Panic of 1907 was the first major financial crisis to plague the U.S. in the 1900s, the last recession having been back in the 1890s. The Panic of 1907 was actually a severe monetary contraction that manifested itself as a recession. Many people lost jobs, many businesses went out of business, and many financial institutions were challenged by the panic.

What brought on the panic was when a run on Knickerbocker Trust Company deposits caused a monetary contraction. This occurred on October 22, 1907, and was the incident that was to blame for the panic. The lack of confidence is really what drove the recession home.

As you can see, confidence plays a huge role in preventing recession. And when consumers, money holders, and laborers lose that confidence, runs are started, and things turn bad for the economy. Confidence is imperative to any economy

The House voted 246 to 183 for the measure, with no Republicans in favor and seven Democrats in opposition.

The Senate plans to approve the package in a vote that Majority Leader Harry Reid, a Nevada Democrat, said will start at 5:30 p.m. Washington time. Senate passage would send the bill to Obama for signing and give him the first major legislative victory of his administration.

“After all the debate, this legislation can be summed up in one word: Jobs,” said House Speaker Nancy Pelosi, a California Democrat, during today’s floor debate. “The American people need action and they need action now.”

The final Senate tally may be delayed as one member, Sherrod Brown, returns to Washington from Ohio following the death of his mother.

Because of paperwork that needs to be done, the legislation will reach the president’s desk “no earlier than Monday,” White House press secretary Robert Gibbs said.

Democrats predict the package would save or create 3.5 million jobs. Its centerpiece is a $400 payroll tax cut for individuals and $800 for couples. Retirees, disabled veterans and others who don’t pay payroll taxes would get a $250 payment.

Republicans argued that the bill contained an excess of government spending and, because of that, would fall short of providing a boost for the economy.

“I think everyone in this chamber on both sides of the aisle understands we need to act,” said House Minority Leader John Boehner, an Ohio Republican. “But a bill that’s supposed to be about jobs, jobs, jobs has turned into a bill that’s all about spending, spending and spending.”

Businesses won several tax breaks, including faster write- offs for equipment purchased in 2009 and incentives for companies that produce and invest in renewable resources such as solar and wind power. A business tax break pushed by the U.S. Chamber of Commerce would ease near-term tax burdens on companies and buyout firms that restructure debt without entering bankruptcy.

Democratic congressional leaders negotiated the final version of the bill this week after the House and Senate passed their own versions of it.

When the House voted on its version last month, it passed 244-188 with no Republicans supporting it and 11 Democrats in opposition.

Representative Allen Boyd of Florida was one of the Democrats who voted for the plan today after opposing the original House proposal. He said lawmakers “have worked hard to make this a better product,” in part by reducing some of the spending the House version had included.

The package would restrict executive compensation at all companies receiving assistance from the Treasury Department’s Troubled Asset Relief Program, not just those receiving “exceptional” aid as the Obama administration announced last week. The legislation limits bonuses and other incentive pay at those companies on a sliding scale according to how much federal aid they take.

The bill would impose bonus restrictions on senior executive officers and the next 20 highest paid employees at companies that receive more than $500 million from TARP. Companies receiving between $250 million and $500 million would face restrictions on bonuses to their senior executive officers and their next 10 highest-paid workers. The restrictions would apply to the top five employees at companies receiving between $25 million and $250 million.

The nonpartisan Congressional Budget Office said today the stimulus package would cost $787 billion, rather than $789 billion lawmakers estimated earlier this week. The plan would pump $185 billion into the economy this year and $399 billion next year, the agency said.

“This country faces the greatest crisis that we’ve seen in terms of the economy since the ‘30s,” House Appropriations Committee Chairman David Obey, a Wisconsin Democrat, said as he urged passage of the bill. “The other tool normally available to us is monetary policy in the form of low interest rates through actions of the Federal Reserve. We’ve already fired that bullet – – the only bullet left is fiscal policy.”

Representative Jeb Hensarling, a Texas Republican, said the measure would fail to revive the economy because “you cannot borrow and spend your way to prosperity.” He also said that through the bill, Democrats were aiming to “stimulate big government.”

Democrats released the text of the plan late yesterday, prompting complaints from Republicans they didn’t have enough time to review the legislation before voting on it.

“It is over a thousand pages,” said Representative Tom Price, a Georgia Republican. “It is physically impossible for any member to have read this bill.”